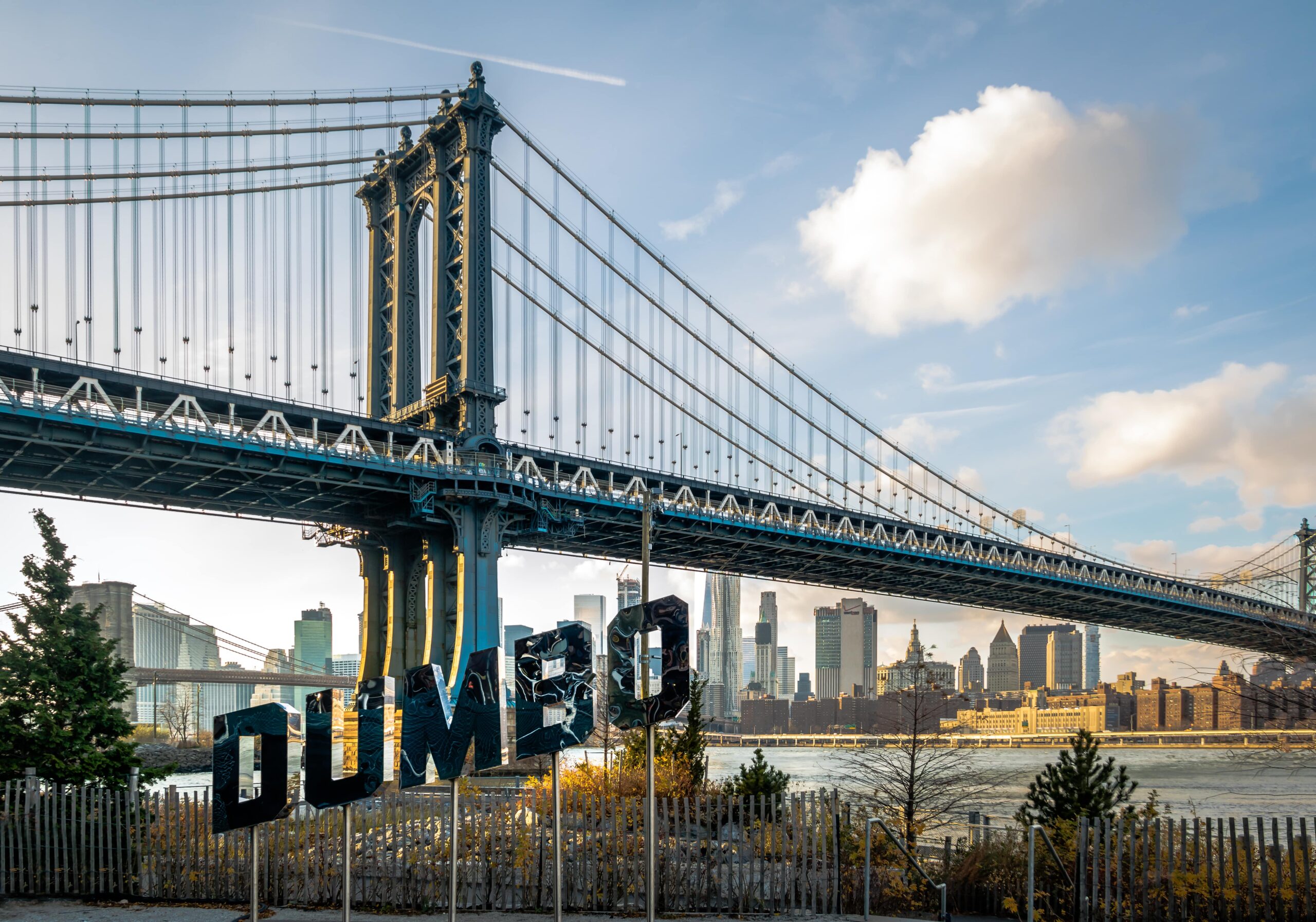 DUMBO is one of the few neighborhoods in NYC with a fun name, though its “christening” had very serious roots. Once an enclave for artists, the neighborhood still retains its artistic spirit.

DUMBO covers .050 square miles of area. It’s bordered by the Brooklyn Bridge on one side and Bridge Street on the other. The other two sides are York Street and the East River. The Manhattan Bridge “bisects” DUMBO, though not neatly.

The neighborhood we now call DUMBO was passed down from Native Americans to Dutch in the 1600s, then to the British in 1700s, and finally to Americans in 1789. It experienced an industrial (and social) transformation in the 1800s which continued all the way to the 1900s.

An industrial exodus coupled with the great depression changed the industrial landscape and turned it into a haven from artists chased out by other neighborhoods going through a renewal. The neighborhood itself was officially rezoned in 1997.

DUMBO started attracting a lot of tech business and tech-oriented entrepreneurs in the 2000s. It is currently home to the headquarters of tech companies like Etsy and Amplify.

Origin of The Name

DUMBO or Down Under the Manhattan Bridge Overpass, like many other NYC neighborhoods, got its name for its location. However, unlike many that were named by officials, DUMBO was named by its residents (a naming committee made up of four people) in 1978.

It was one of the two names suggested (DUMBO and DANYA) at a time when the development/renewal pressure was threatening to turn the current tenants away from the lofts in the neighborhood. DUMBO was selected (ironically) to keep developers and wealthy buyers away from the place.

The name DUMBO is not associated with the movie of the same name that came out decades before. The neighborhood was also referred to as Gairville, after Robert Gair, who had many concrete buildings constructed in present-day DUMBO. Older names for DUMBO are Olympia, Walentasville, and Rapailie, though they might not have the exact same geographic boundaries as today’s DUMBO.

Main Attractions of The Neighborhood

DUMBO can be a food-lover’s dream neighborhood, but only if you know the right food establishments.

What Is DUMBO Known For?

DUMBO is known for:

Being one of the most expensive neighborhoods to buy a condo in (Brooklyn).

DUMBO is home to about 5,000 people (estimated). It is right in the middle of one of the most expensive neighborhoods in NYC list (24th on a list of 50).

The largest concrete reinforced building in the world in 1905 was commissioned by Robert Gair and constructed by Turner Construction Co., was in DUMBO (55 Washington Street).